Everything You Need to Know about Teen Patti

If you’re an Indian player who loves a good old game of poker, we’ve got just the treat for you! Ever heard of Teen Patti? Whilst some of you may be familiar with it, we thought it would be a good idea to create a news post for the casino newbies. We can assure you that it’s every bit as exciting as poker is! Want to learn more? Keep reading!

What is Teen Patti?

Teen Patti is one of the most popular Indian gambling card games.

So, first things first. What is Teen Patti? In short, Teen Patti is one of the most popular Indian gambling card games, that is offered on multiple online casino providers like ourselves. Interestingly, the title translates to ‘three cards’. As you can already tell, it is has number of influences from poker. In fact, it’s also very similar to an 18th century British card game called Brag.

How to Play Teen Patti

First off, Teen Patti is played with a standard deck of 52 cards without any jokers. 3 to 6 players can participate, each of whom will be given three cards. At the early stages of the game, the cards will be facing down. Prior to dealing the 3 cards, players have to decide on the boot amount. In other words, this is the minimum stake that is put in the pot. With each move players make, the pot continues to increase.

The player sitting next to dealer kickstarts the action and the game will progress in clockwise direction. It’s important to note that players have the option to place bets without seeing the card. In this case, the player in question is known as a Blind Player. If you want to see your card, you’ll be a Chaal Player. 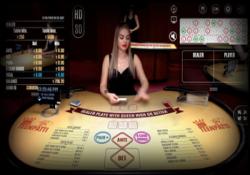 As far as hand rankings go, there are 5:

So, what’s the key to winning a game of Teen Patti? Like poker, the player with the best hand or the highest hand based on the aforementioned rankings, takes home the pot of gold!

Check out more news about the Indian casino industry here:

Sign up to the Casino India for the best bonuses & prizes!

Gambling can be addictive. Adopt responsible gambling habits and seek help immediately if you develop problems. Online gambling can be illegal depending on the jurisdiction. Casimoose.ca takes no responsibility for our readers, so be sure to check your local regulations.